Fire Alarm systems can generally be put into two main system designs:  Conventional (Analog) and Addressable (Digital). In order to understand what system may be right for your company's building or office, it is important to understand the differences between each system. So let's begin...

Conventional fire alarm systems have been around for many of years and have changed little in terms of technology. Although design and reliability have improved significantly, the system's technology has protected many hundreds of thousands of properties worldwide. A conventional fire alarm system is often the natural choice for smaller systems or companies with budget restrictions.

Within this system,the "intelligence" lies within the fire alarm control panel. The panel receives a trigger signal from a conventional detector or an initiating device.The designer must be sure that the last device on the circuit has sufficient voltage to operate the device within its rated voltage.

Conventional fire alarm systems are based upon the AWG of the cable and broken down into two categories:

An addressable fire alarm systems differ from conventional systems in a number of ways. An addressable system adds more flexibility, intelligence, speed of identification and scope of control.

An addressable fire alarm systems are generally selected for larger buildings with more complex system requirements. In an addressable system, detectors are wired in a loop around the building with each detector having its own unique address. From there, the fire  alarm control panel communicates with each detector individually and receives a status report

As each detector has an individual address the fire alarm control panel is able to display or indicate the precise location of any device showing an internal issue. Addressable detectors are intelligent devices which are capable of reporting far more than just fire or fault conditions. 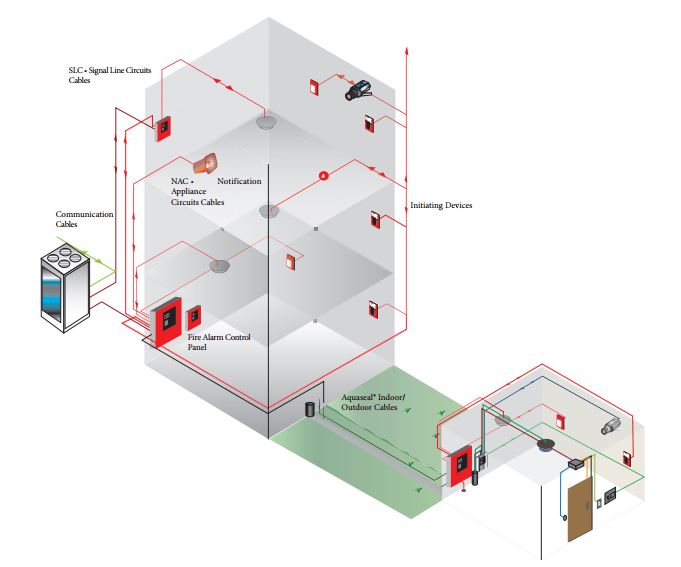 To see the difference for yourself and learn more about fire alarm cables, see what our Product Line Managers have to say by viewing the West Penn Wire Youtube channel: